100% Self Navigation with Environmental Redirection in Unseen Diplomacy 1

Unseen Diplomacy casts you as an elite member of The British Espionage Tactical Initiative, defeating the plans of evil-doers around the world. With a real-life obstacle course created by the Vive’s incredible virtual reality environment, you will run and roll, sneak and solve your way through volcano lairs and moon bases.

But one of the most innovative ideas Unseen Diplomacy demonstrates is the ability for players to move around a gigantic environment, completely one to one, with no player affecting artificial ‘navigation methods’ such as teleporting.

In this blog post we discuss where the idea for the game came from, and how we came up with the ‘Environmental Redirection’ that allows players to navigate a potentially limitless space, and be the spy they wish to be.

Why does artificial navigation exist?

So to understand why Environmental Redirection is so different, you have to know why artificial navigation in VR currently exists. At this time, there is no consumer device that can track you around the world – only the HTC Vive can offer up to 3m x 4m play area. The game concept you create has to keep players inside this area somehow.

So how are players to navigate a massive world, if they can only walk in a 12m2 area? More often or not, the game gets players to artificially navigate themselves, by performing an action which will move the player’s avatar somewhere else in the virtual world.

In flat games, this has been done with FPS gamepad controls for years – but due to a combination of VR feeling so real, and a mismatch of forces you experience in the VR world and the real world, this can be really uncomfortable for players and will make them feel ill.

To get around this rather than use FPS controls, the most popular choice for VR games at the moment is teleportation, but there are others out there. We’ve looked into some before and discuss them here ( http://www.triangularpixels.net/cms/development/navigating-comfortably-in-vr/ ).

The problem with every kind of artificial navigation is that it’s always fake, not what humans experience in real life, and potentially still make people feel uncomfortable. If the player isn’t moving themselves around the environment naturally then it could always cause issues.

What is Environmental Redirection? Why is it different?

For this blog post, I actually had to reach out and ask people what they would call what we invented! Environmental Redirection is a short way of saying ‘rather than messing with player’s avatar in VR, we mess with the environment around them’. This is a radically different approach than in other navigation methods to date, which are all affecting players avatars.

Players move as they do in real life, by walking, running, rolling – however they wish. There’s no teleporting, no FPS controls, no portals, just themselves. This means artificial navigation methods, that can trigger sickness, are not at all in the game. Also, non-gamers take to the game a lot quicker, as they just behave as they do in real life – without any special rules.

How do you mess with the environment to make it feel bigger?

We split up the player area available into four quadrants, let’s just say 4 rooms for now. Each room is blocked off by a door. When you open a door, the room in front of you loads. When you step into that room, the door shuts and the room you just left is loaded out. This means you can walk in circles, going in and out of lots of small rooms, with those rooms taking up the space previous rooms were in – ‘non-euclidean space’.

It’s not quite that simple though – if you just did that you would know you’re walking in circles in a tiny space! So we resort to some really smart level design to stop that from happening;

Where did the idea of Environmental Redirection come from?

We didn’t set out to create a new form of navigating in VR, it sort of happened out of the blue. Back on 14th July 2015 Bossa, HTC and Valve came to London to do a Vive Jam. Hardware was really hard to come across, and we wanted to experiment – so we went along to that. The challenge was ‘to use the room space’.

It was just John Campbell and I, and while John was testing out the SDK – I was tasked to create a game idea. I didn’t really have long as we only had two days there. I remember sitting in the tracked area, thinking ‘well, it’s a big tracked space, but it’s still not a very big room’.

I had a big mix of ideas, from being Godzilla to having some sort of cute virtual pet. I kept coming back to the Crystal Maze through – a UK TV show back in the 90’s in which there was a series of rooms with a mix of physical and logical tasks for a player to do, which other people helped out on a monitor while powerless to physically help. 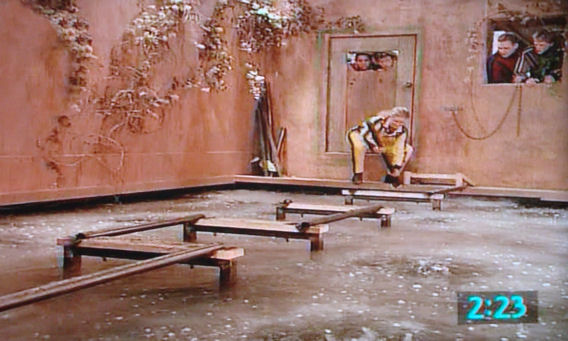 Looking around, many of the other ideas were coming up with some very pretty ways to pen you inside the space a little more naturally – either using fences, or you’re on a island or iceberg. In terms of level design, I wanted to break that up somehow, I wanted players to forget entirely where they are and not for them to know which wall was inside or outside their tracked space.

So the first thing I did without any code was to just model a crawl space air vent – some other way of moving, some way of getting players to be really physical, and it was a hit! It felt so good, my mind was going crazy! The mixture of actually getting to do that in a game, crawling on the floor, and having the real feedback of the floor on my arms and knees was incredible. 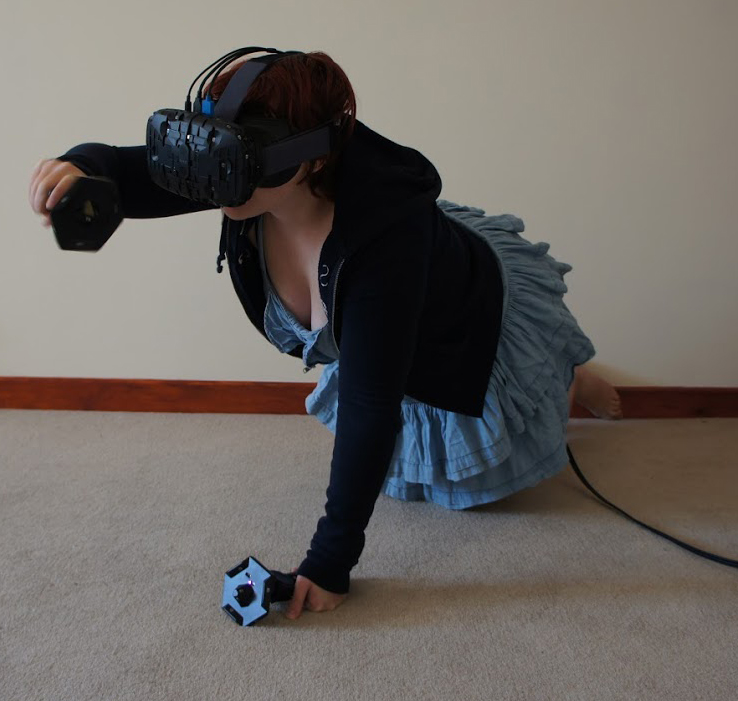 So I go report back to John, and we start talking about how we’re going to extend that space – because in 3m x 4m you really don’t have much space to have a big vent. This is where we come up with the idea of having quadrants, and loading in and out rooms in front and behind of the player.

Our Jam game was born, The Hatton Garden Heist ( http://www.triangularpixels.net/cms/events-2/london-vive-vr-jam-the-hatton-garden-heist/ ). Created in less than 24 hours it was an utter hit with the other attendees and with the BBC which happened to come along. 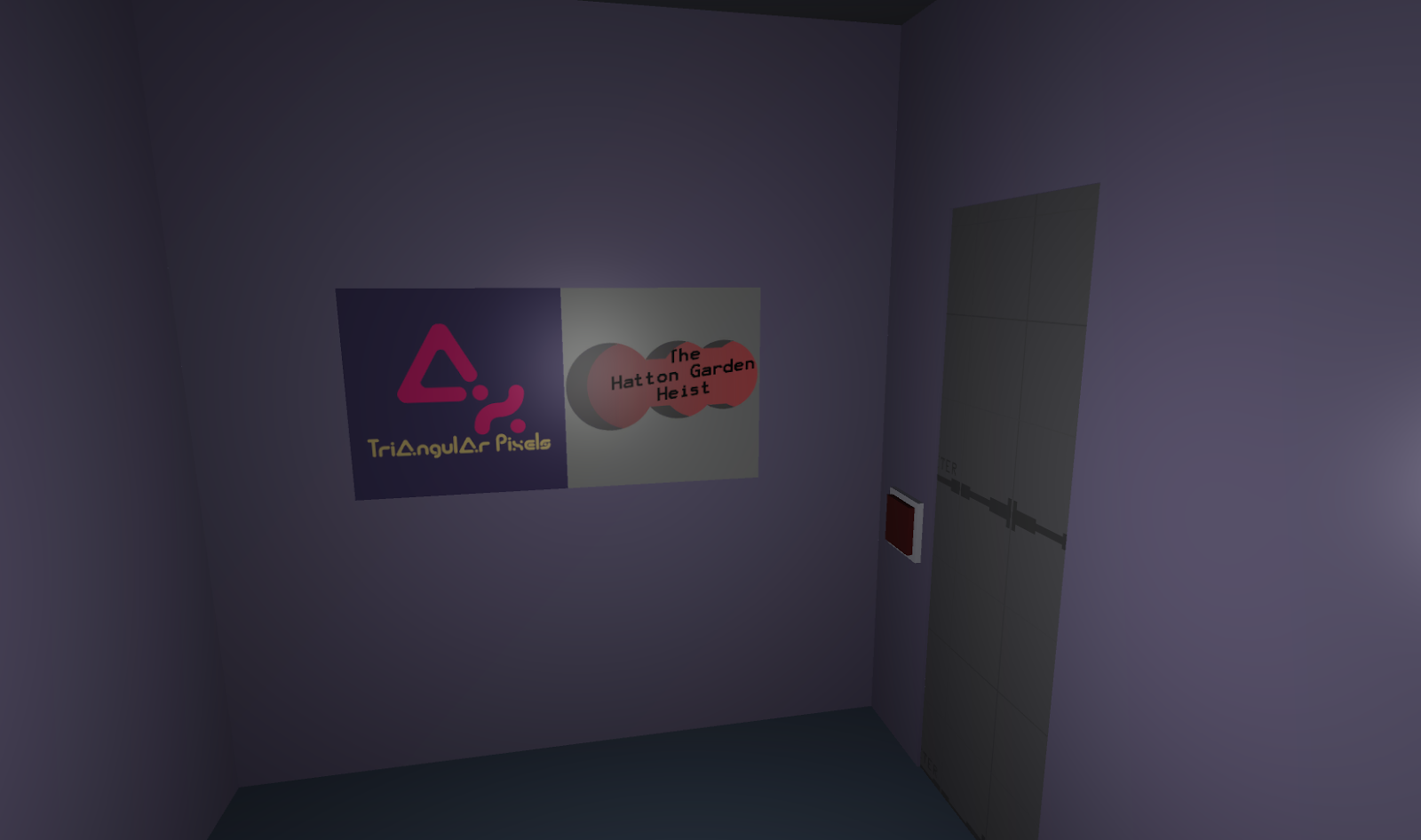 What about Unseen Diplomacy?

We both always wanted to make a installation game. We’ve been going along to gaming events, playing various really crazy one of games using specialist hardware – and wanted to do the same. Games like Johann Sebastian Joust and Line Wobbler: A one-dimensional dungeon crawler, were so cool. GameCity in Nottingham and the National Videogame Arcade (NVA) was the perfect arena for us.

The people at the NVA were so brilliant to us the year before, we wanted to make a game for them. The idea of Unseen Diplomacy was born. They would give us a spy-like giant room, spy actors, and theme up the space – and we would bring along a social VR game that allowed friends and family to play together.

So we looked at the Hatton Garden Heist and Crystal Maze again, and came up with Unseen Diplomacy. We showed it for a week at GameCity, and it went down so well – everyone was super happy with it, and we basically left it as it. Our live-theatre like social VR experience mixed with a VR assault course had done it’s job. 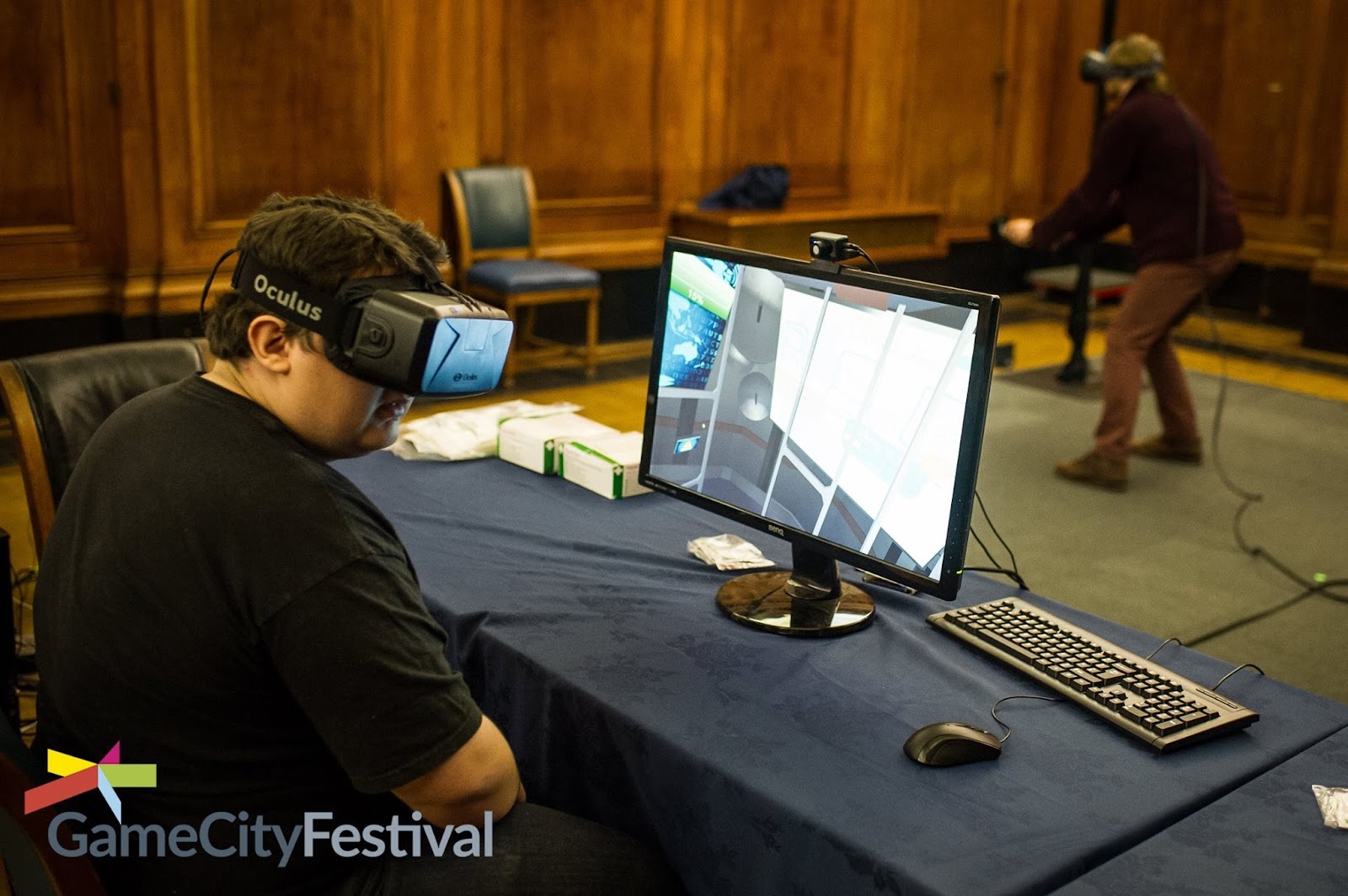 That is – until the press caught hold of it just before GDC this year, and Valve said they wanted to show our game at GDC. The game went a bit viral, and even though it was just the core single player experience we were showing – people still loved it and were begging for us to release it. We were scared to though – it wasn’t long and it needed the large play area as we had designed it just for one event, it didn’t feel up to our AAA standards and were afraid of the reaction. We talked to Valve and some other friends – who convinced us to launch it. So, on the Vive launch day – we also launched Unseen Diplomacy (http://store.steampowered.com/app/429830/).

We’ve got a lot of new an exciting tech for Unseen Diplomacy 2 that we’re looking forward to sharing with you!